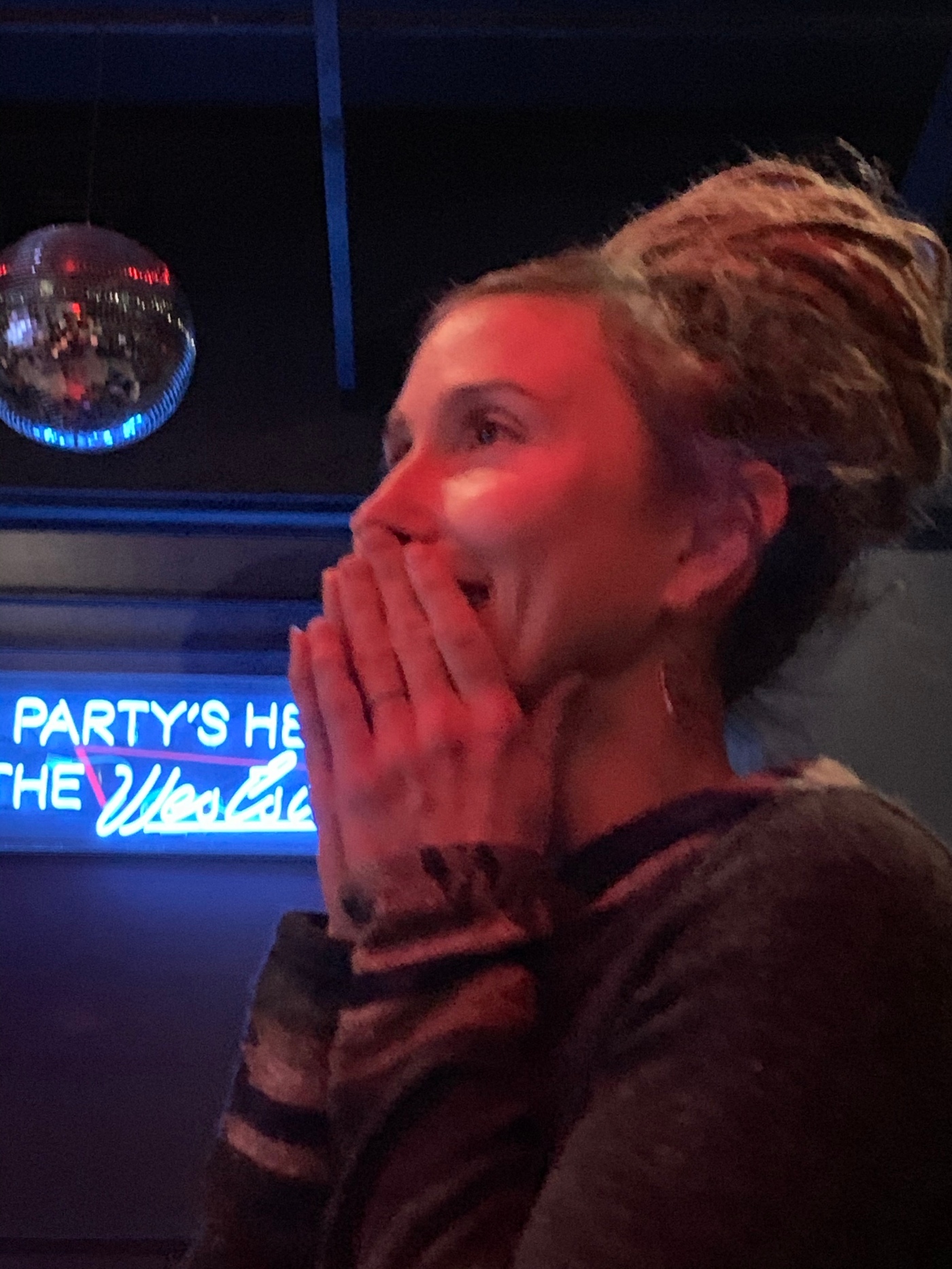 Last night I conquered one of my greatest fears.

Since Oliver’s birth I have been forced FAR outside of my comfort zone countless times.  Advocating for him has demanded me to develop qualities I never dreamt would be a part of my life – strong, emboldened, demanding, persistent, driven and relentless.  For years the softer, loving parts of me have been shoved aside and these rougher qualities have taken the reigns.  I became a person that was difficult to love  – quick to react, easily angered and slow to forgive.  Over-bearing, insecure, jealous and judgmental, I became a fighter with a fire that I suppose I always knew was there, but rarely made an appearance.

I have accepted this alteration of my Self because I knew it was a necessary part of my personal growth and a protective coat of armor against the battles of special needs motherhood.  But I haven’t loved this person.  I have hated her.  I’ve begged the universe to hurry my evolution so I could escape the wrath of this tyrant within.

And then one day, not so long ago, something changed.  The shift I’d impatiently awaited became my reality and I began emerging from the angry place in which I’d become lodged.  I allowed my heart to reopen and some of the darkness began to leak out. It was scary and I felt vulnerable and exposed but also it felt like relief… A space to breath beyond the suffocating vacuum of isolation and grief.  In place of the anger, a warm glow of love appeared and I felt true happiness for the first time in years.

This hint of forward motion, igniting within me a fire that’s been one of the most powerful things I’ve ever experienced, has brought about incredible transformation in my life… I have finally found the flow…

Last night was a culmination of significant effort and daring and served as validation that the incredible amount of work I’ve done this year is, in fact, changing me.

A year and a half ago I sat at a story telling competition and watched in horror as one of my best friends bravely approached the stage.  He seemed confident and at peace doing one of the most awful things I could ever imagine… public speaking.  He won the event that night and as he came down from that stage I was in awe of him.  I said definitively;  ‘Omg I cannot believe you did that.  That is something I will NEVER be able to do.’

But I have grown since then.  Three months ago I decided that within 1 year, I would do a Moth storytelling event.  I figured I would procrastinate until the very last month of my 1 year time frame, but last Saturday I woke up with what I knew was going to be my 1st Moth Story.  The time was now.

The massive amount of anxiety I experienced leading up to last night certainly took a year or two off my life but I’ve never been more ready to jump.

Last night’s venue looked unsuspecting.  As I approached the entrance it felt like my organs were shivering with fear and I prayed that there would be just a handful of people inside.  To my horror I walked in to a large space FULL of people.  There must have been nearly 200 excited willing participants inside.  I ABSOLUTETLY panicked.  I turned to Matty and said ‘Oh my god, I don’t think I can do this!’ and moved toward the exit.

But he reassured me for the 500th time and led me up to the stage to sign up. I put my name in the hat with 32 other storytellers, unsure if or when I’d be called since only 10 people would be picked to share their stories. The show started and I felt my heart begin to race as they drew the first name. The stories were great and I tried my best to focus on them instead of my frantic mind. After the 3rd one ended, the MC pulled another name and said ‘Sssss…’ and then something interrupted him. I sat up on the edge of my seat holding my breath, half wishing he’d call my name and half praying he wouldn’t.

My eyes opened wide and sweat immediately dampened my shirt. I felt like I was surely about to pass out. I stood at the side of the room while the previous woman received her scores. The wait was excruciating. I could feel my ribs expanding widely against my coat as I struggled to slow my racing heart and catch my breath. It felt like all eyes in the room were on me, watching this anxiety manifest physically in my body.

They called me forward and I crept up the stairs, my heart now beating so loudly in my ears that it felt like the room was closing in on me.  I turned to face the crowd and the lights shined brightly in my eyes.  My face was completely numb from hyperventilation and I thought for sure I’d soon hit the ground.  I closed my eyes and tried to center and summon the courage within me.  And to my surprise, I did.

Shakily and timid, I came close to tears as the sound of my lone voice filled the quiet room.   It was surreal.  But the crowd was loving and supportive and their cheers gave me the nerve to continue.  The 6 minutes I’d feared for so long went by in an instant and my story flowed from my lips exactly as I had hoped.

The final lines were-

Tonight I faced one of my deepest held fears

And ran full speed ahead off a cliff

It was a life-changing experience.

My tears have fallen freely today with a heartfelt sense of gratitude for this journey and the many gifts it’s given me. My soul soars with the assurance that I DO have the power and ability to transform my life, finding liberation from a long period of unconsciousness. All the years of self-development groundwork are FINALLY coming to fruition.

For the first time I feel a genuine love for a Self with whom I’ve been at war for 36 years.  For a lifetime I’ve searched for what I was made to do…

And now I have finally been given my assignment. I am a writer… Maybe a storyteller even… Words are the love I have to share with the world.  So tonight I leave you with these few….

If you find yourself stuck and feel like you’ll never get out… Claw your way up from the darkness that consumes you. Stay focused on the light. Demand growth, and change, and evolution of yourself and seek support from whatever surrounds you, even the unlikeliest of muses. Create the most magnificent and wildest of imaginations for your highest potential and take steps, as often as you can, to reach them. Fight for this with all your heart and don’t take no for an answer. You WILL get there. And when you do, it will be grand.