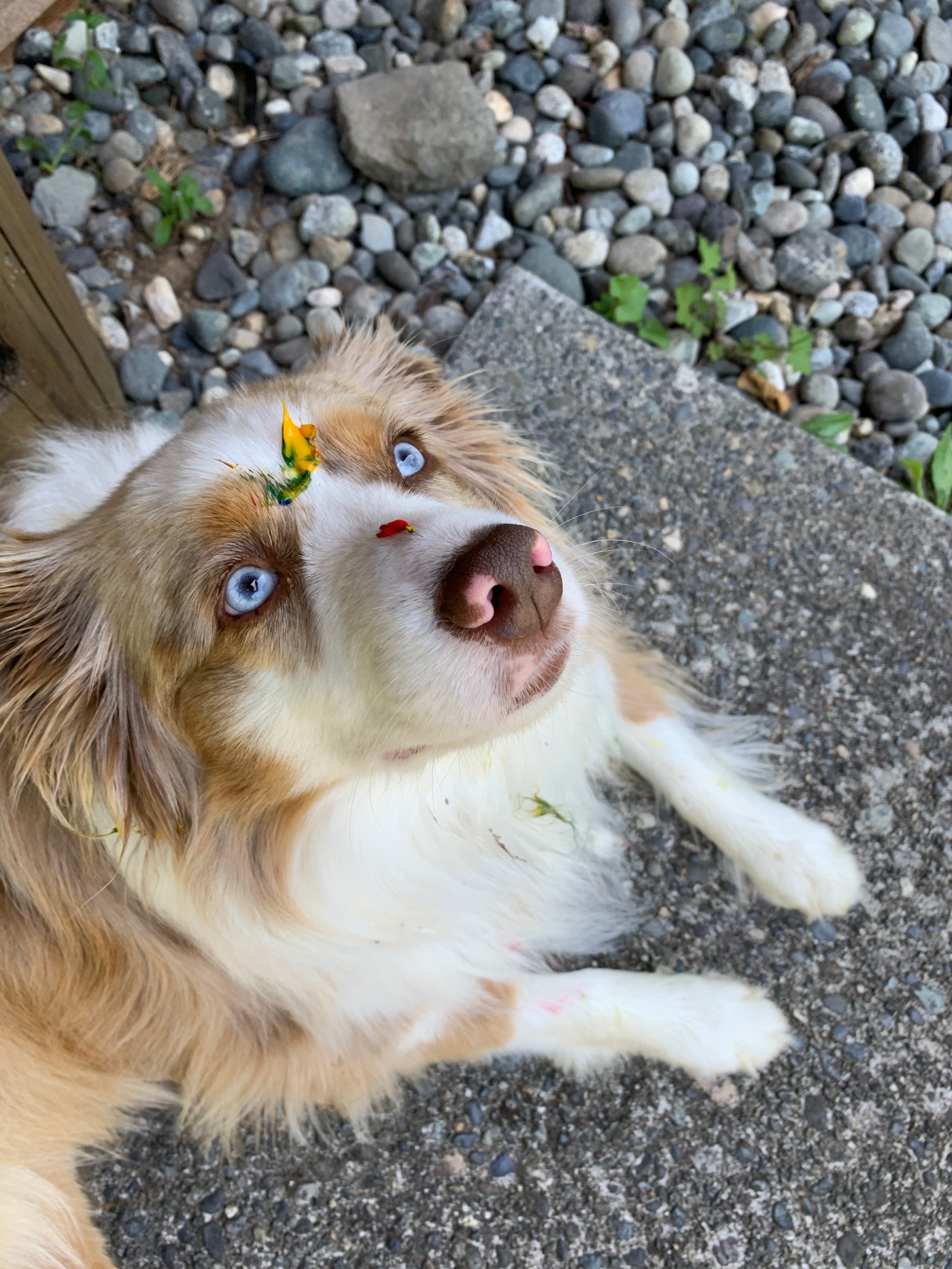 I woke up this morning to the all-too-familiar sound of destruction, our cat digging her claws into the soft pine wood of the closet door frame. I stumbled out of bed and batted her away asking myself for the four millionth time, “Why do we have pets?”

Just then a chill ran through my body and I realized it was colder than usual in the house. I threw on a heavy sweatshirt and my thickest sweatpants and thumped sleepily down the stairs thinking winter must’ve come early this year. As I reached the bottom of the stair case the unpleasant aroma of dog shit filled my nostrils. My husband flashed me a look of half exasperation half exhaustion and warned sharply, “Don’t let Nicco go into the TV room! There’s dog diarrhea everywhere!”

I briefly considered animal sacrifice (For anyone unfamiliar with the twisted sense of humor I’ve developed over the years, this is joke. Please don’t call PETA) and then hesitantly backed up a few steps, already anticipating the hours of clean up ahead. Thankfully, the worst of the mess somehow landed on the only patch of hardwood flooring in the room. However, there were drips EVERYWHERE, including the couch and the white carpet.

(Side Rant: Who the hell invented white carpet?! Ain’t nobody got time for that shit! I need black carpet with specs of gray in it and like some marbling of brown so that you can’t see all of the food stains, the shit stains, the urine stains, the vomit stains, the strawberries mashed into the carpet stains, or whatever else my wonderful gaggle of dependents leaves in their wake.)

Now, I have to pause here to say that this last weekend of helicopter rides, intensive care, intubation and all of the resurfacing trauma has left me even less confident in my abilities to handle this life at the moment, than usual. (A blog post about all of that is half written but I haven’t had the emotional capacity to finish it yet) So, waking up to this morning’s chaos was really not what I needed at all. But Oliver had E-schooling, which of course, I was wildly unprepared for, so there was no time to fall apart.

Conrad went, armed with rubber gloves, bleach and a full roll of paper towels, to the eye of the shit storm and began cleaning while I logged Oliver onto school. We tag-teamed our way through the 45 minute zoom meeting. At one point I resorted to putting YouTube cartoons on the screen next to the school laptop in order to increase compliance and decrease the temper tantrums coming from both boys… Oliver, who really struggles to be engaged with E-schooling and Nicco, who desperately wanted to go into the TV/shit-covered room to watch his cartoons which, much to my chagrin, have become his best friends during this quarantine time.

As we struggled to mop up all of the dog shit before Nicco could break free and run through the piles, further spreading the mess, I heard Oliver’s name called for Show and Tell. Today, Show and Tell was supposed to start with the letter G so I frantically looked around for some thing that started with a G. G….G…. G-tube! I lifted up Oliver’s shirt and showed his class of typically developing peers G is for G-tube!

“Oliver doesn’t drink with a cup. Instead, he drinks through his tummy!” I said excitedly. “That’s kind of crazy huh?!” It was definitely the worst G-tube explanation I’ve ever given and in the middle of the whole thing I realized that maybe showing kindergartners a Mic-key button surgically implanted into my sons abdomen and the syringes that go with it, may not have been the best choice for Show and Tell. And then I wondered if the principal might be getting a call from some concerned parents later in the day. But this is what advocacy is all about right? This is normalizing the special-needs life, right? That’s part of my job as the medical mama right? All of these questions running through my head as I was stumbling through my clumsy ass explanation of G-tube feeding. Oh well, I thought. Now back to dog shit.

As I started my carpet cleaning duties I wondered to myself, “Does everyone feel like they’re drowning all the time? Or am I just unusually bad at this adulting thing?“

One entire jug of carpet cleaner, 3 blisters and five water changes later I was nearly finished with steam cleaning the carpet when I hear Conrad yell, “Nicco no! I told you not in the house! You’re getting water everywhere!” I look around the corner just in time to see Nicco spraying the garden hose through the front door and onto the floor where Conrad was attempting to clean up the rest of the dog shit. I decided to let him handle this battle and turned back to my duties only to be interrupted again by Conrad yelling, “Dammit Nicco!” This time, I turned around to see Nicco holding the dripping mop over the couch, making what, I will assume, was an honest effort to help with the clean-up process while Conrad went to deal with the spraying garden hose.

At this point I just collapsed in laughter. I mean what else can you do? You know how in AA, they talk about having an unmanageable life? Well I’m pretty sure that I am living one of those. I never feel like I can get ahead right now and on my very best days I am only just handling the basics.

Thankfully, I had a doctors appointment today so I abandoned the clean-up project, jumped into the shower to rinse off the dog shit residue and then high-tailed it outta that house calling to my husband “Good luck with the shit show! I might never come back!”

I jumped in the van, closed my eyes for a few seconds, took a deep breath and thought, “I don’t even care what that doctor does to me today. Stick my arm with needles for all I care. It’s gonna be like a spa day compared to staying here!!”

So the morals of today’s rant,

If you’re living a somewhat chaotic life and are thinking about adding a pet into the mix, I HIGHLY suggest not doing that. But if you really can’t resist sabotaging yourself, perhaps pick a guinea pig. I feel like guinea pig poop would be much easier to manage and also, they are hilarious when they chew.

And for the other poor saps stuck with a carpeted floor and unfortunate circumstances, this Bissell Carpet Cleaner is my lifesaver. It should come as no surprise that I definitely don’t get paid for anything on this blog so, rest assured, this is an honest and true recommendation.

And lastly, never underestimate the value of humor. A lot of the work I do in my personal growth and healing, revolves around finding the laughter through the tears, the rays of sunshine through the storms. We didn’t get the easy road. Life feels overwhelming a lot. But laughter, when I can find it, is the medicine that lightens my soul.