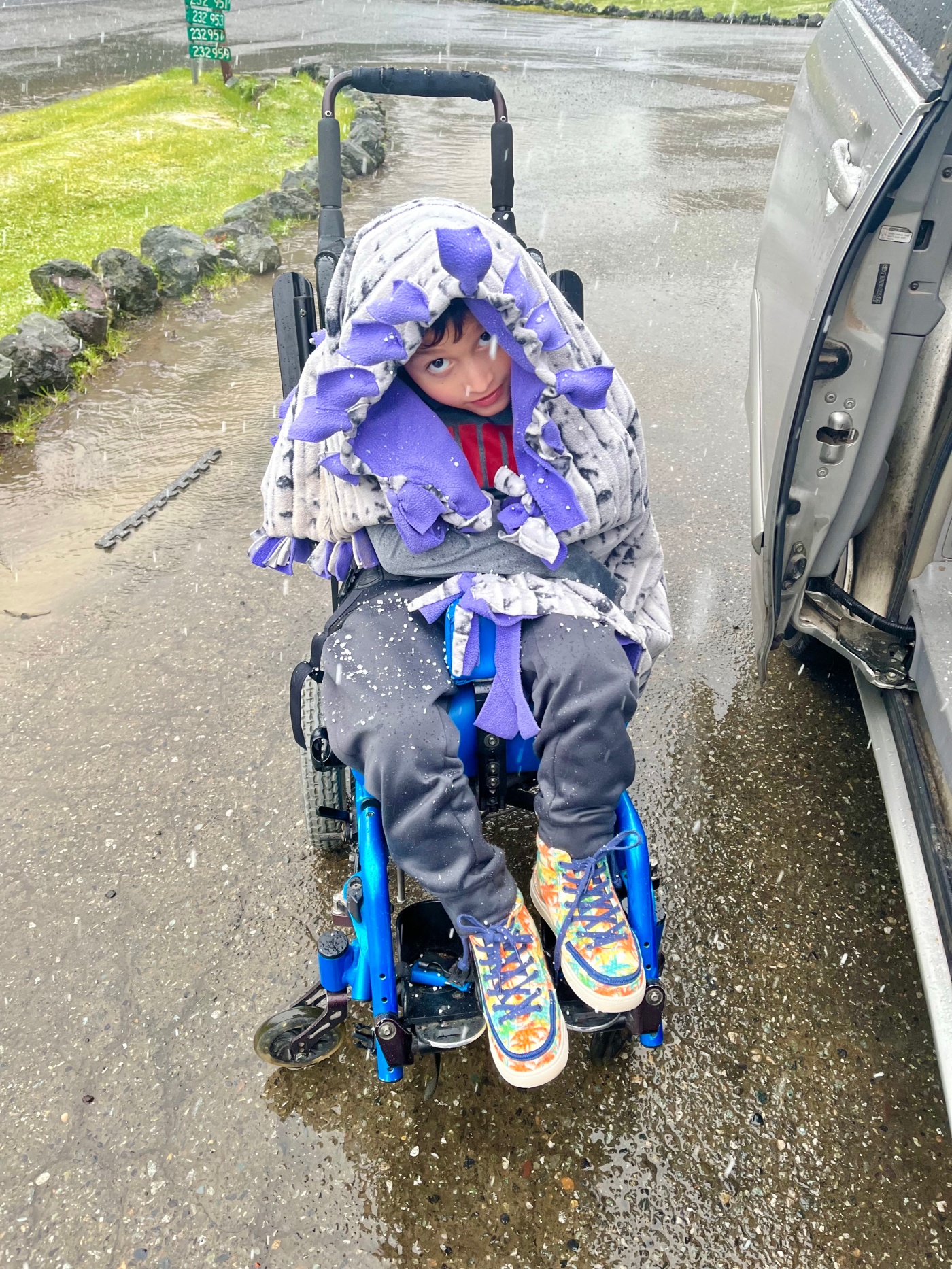 I’ve been meaning to post a Baclofen Pump update for a long time but the weeks just keep flying by!  And to be honest, I’ve also been waiting for a turning point where I could report glowing reviews of this procedure and it’s effects, but that hasn’t come yet, so I figured I’d share our experience up till now.

The pump, for Oliver, has not been the instantly transformative solution to his spasticity and dystonia that we’d (perhaps naively) hoped it would be.  Oliver didn’t come out of surgery immediately more comfortable in his body, in fact he came out of surgery vomiting, feverish and hospitalized for 10 days for rather inconclusive reasons.

In the 5 weeks since surgery we’ve had both positive and not so positive results. Oliver’s overall tone and ability to overpower his caregivers and equipment with his extension pattern, has lessened.  His hands, feet and ankles are also far more relaxed than they’ve been in years. The functional life effects of these changes look like,

On the other hand, we’ve been disappointed to notice all the sedation that Oliver is experiencing because it effects his ability to be active in his gait trainer/bicycle and engaged in his learning and interaction with the world.  We were told that one of the main reasons to get the pump was that when the Baclofen was delivered directly to the CSF, it usually DECREASED the sedative effects when compared to oral Baclofen.  So far, this has not been our experience and that’s been very frustrating because we’ve felt like if he was going to be this sedated, we would’ve rather just given him more oral Baclofen instead of putting him through the pain and suffering of surgery.

We’ve also noticed that the effects of the Baclofen seem to fluctuate wildly throughout the day.  Another supposed benefit of the pump is that  it provides a constant drip of medication into the spinal fluid so there should be no variation in the dosage circulating in his blood.  So at this point we are confused by the fluctuations and hope that, over time, we will figure out why that is happening.

Oliver’s head control is another thing that has changed in a less desirable direction since surgery.  When he goes through those periods of sedation, his head is very floppy and so his airway is not as open as it used to be.  Often times he actually sounds like he is snoring although he is wide awake.  Oddly, while his neck is so much weaker, the surgery has had no effect whatsoever on his oral dystonia, which continues to be a significant problem and one that prevents him from eating orally like he did before the dystonia got so bad.

All in all, the pump has been a mixed bag so far.  I must admit, going into the surgery, I was expecting somewhat of a magic bullet (not that that exists in the medically complex world 🤣) but still, I thought that he would exit the operating room mostly free of dystonia and spasticity.  As you can see, that’s not exactly how it’s gone.

So we continue to play the game of wait-and-see (admittedly one of my least favorites).  At this point, I’d be absolutely lying if I said I felt good about our decision to do this surgery.  In fact, self-doubt is my ever present companion right now.  But I remind myself daily of all of the positives that HAVE come from this, that we made the best decision we could with the information we had, and to be patient with this process, giving him time to adjust to all the changes.

My highest hopes are that the fluctuations of the drug within his body even out, allowing us to dial in the optimal dosage that keeps him comfortable but not zoned out.  And that we find a way to get him all the therapy he needs to rebuild true strength now that he has less spasticity to rely on for movement.

So for now, as it has been at so many points in our journey, I will continue to lean on my hope and the support of our community to see this through.  I  look forward to writing a follow-up post a few months down the road, detailing all of the (hopefully) wonderful change we’ve seen from this procedure and all the ways it has continued to improve his quality of life.